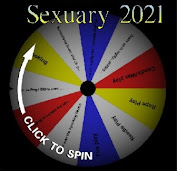 Ok, for those of you who have followed our blog you know that Jackie got her nipples pierced for Sexuary 2020.  It was the last day of Sexuary, and was something she'd wanted for a couple of years.  Was funny, because some time during Sexuary 2020 she even said, "geez, I'd really think I'm ready to get my nipples pierced" not knowing I had already made an appointment with someone to have them done.

Well if you're into piercings, then you know it's kind of like tattoos, you start with one, but that's just the start, you are always wanting more.  Jackie is no exception.  She had pierced ears, but had let them close, so she wanted them back opened up.  She wanted another one on her upper ear, and one on her eyebrow.

So being the guy I am I started my research and started gathering tools and equipment I needed to make that happen.  It's taken me months to be prepared for Sexuary 2021 and the possibility to do several piercings.  I wasn't disappointed when I pulled the tag to do piercings.  I let Jackie know and asked her exactly what it is that she wanted pierced.  Well she did want her nose along with her eye brow and ears, but we didn't have the proper piercings for the nose (they are ordered and will be here next week).

But in the meantime I was able to get her 2nd hole in her ear reopened, and then put the 16 gauge needle through her upper ear.  The amount of blood was a bit over whelming, but otherwise the needle went right through and the earring went right through with it. 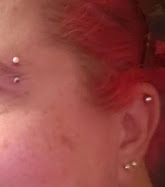 Now up to the eyebrow.  So looking there are a couple of things to be more careful of, like it has to be deep enough or the ring can be rejected and pushed out, and you want it straight, and you want the entry and exit to be about the length of the piece you're going to use. So we marked her eyelid and I used some forceps style device to hold the skin tight and in place. I pushed the needle through and I was afraid the needle had gone through to far without the needle to follow.  Thankfully I was able to back it up and get the piece back in and run it through successfully.  Then the fun began, to put the little bitty ball on the end of that shaft.  I tried, then Jackie tried, then I tried, then Jackie tried, then I finally got it on.  WHEW!!! You have blood, a tiny little ball with a smaller little hole to get on that rod and spin.  I did finally get it tighten on there for Jackie.

A little more clean up of the blood and alcohol wipes for sanitation, then we were done.  Did it hurt? Jackie says it smarted but it didn't last long.  The blood was a bit more than I expected, but we got through it. Next time I'll have the paper towels handy to start.