What the sign doesn’t say, is it’s because YOU have allowed that into this marriage.  Thank you so much!!! – 143

After a day with friends and family we were able to settle down. After my weekly grooming I setup the massage table for tonight's activities.   I pulled the needle box out, the alcohol, the trash can and water for both of us.

When we were both ready, I brought her into the room and let her know what was going on.  I then gave her the choice of whether she wanted it on her front or her back.  It makes a difference on what pattern I would choose.  She decided for it to go on her back, so she climbed up on the table on her belly and got ready. 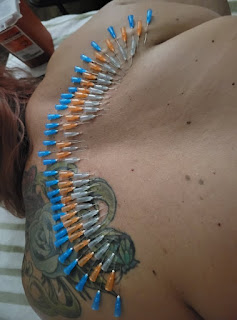 I got to going and started putting in the 27 gauge needles in a row, with a nice curve at the ends.  12 needles on each side of her upper back.  Then I dropped to 25 gauge needles and put 13 orange ones on each side.  I kept making sure that Jackie was ok.  Then came the 23 gauge needles.  These are definitely a bit bigger and there were 14 on each side, and the blue tops tops lined the tops.

When I had the rows done I came back and filled in the middle on the spine.

I was very pleased with the 'wings'

I knew how to take care of that, and while she was on the table I helped her while she had the needles in.  The needles started to 'wave' as she would tense up and release.  Her skin rolled and it was hot to watch the wings wave.

I removed the needles and cleaned her up with alcohol.  As you can imagine the alcohol is NOT her favorite part.  She then relaxed and I covered her up to let her be in the zone for a while.

So if you're interested, the needles I got on Amazon or Ebay.  I get 25 per box, and I generally order 100 of the smaller and 50 of the larger needles at a time.  I don't order anything for needle play larger than a 20 gauge, and definitely use more 27, 25, and 23 gauge than the rest.

Where you put them is all dependent on the person you're putting them on and their tolerance.  This was a larger piece with over 80 needles used.  This was a lot and Jackie had to be in the right frame of mind to enjoy it, otherwise it would of just been pain.

While it's a bit 'over the top' for something new to try, at one time we didn't have a clue on needle play.  It was out of our realm of play things, and yet we took that chance and did it not knowing what the results would be.

How many times have you not done something in fear of the outcome?  We've failed many times in our adventures, but we keep trying, sometimes the same thing again, just to make sure it wasn't a fluke.  It's called growth.  Don't let that fear stop you from trying something different with your partner.