I’m so impressed that even after so much that’s gone in your life that you can still be truly submissive.  Tonight we’ll practice that some.  -143

Today was to be Impact play.  I had purchased a couple of new toys to use,a riding crop from Tractor Supply along with a 6' Buggy Whip from the same place.  I had also made a Thors Hammer (a yoga block with a 1" dowel e6000 into one side of it.

I led Jackie into the room and ran my fingernails down her skin to get the blood flowing.  After she had moaned enough I knew she was ready to go on.  I broke out the Thors Hammer and gave her several good 'hard' smacks on her ass.  Now the thing about the Thors Hammer is there is only so much you can do with that.  It's a yoga brick after all.  So it definitely thuds more than stings.

I followed it up with a nice riding crop.  This one is new and definitely has more sway in the handle the the ones you find on adult toy stores, at 1/2 the price.  It snaps much better than the ones at the kink stores too. 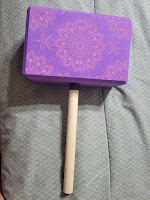 After that I used the dragons tail.  It has a nice snap and will redden any spot it hits proper.  Jackie jumped just a bit as the snaps cracked on her ass cheeks.

I went back to the Thors Hammer for a moment, then broke out the Buggy Whip.  The thing about the Buggy Whip is that you hear it whipping through the air even if it doesn't strike.  You hear the air flow whipping on each strike.  The tip stings if you snap it right.  It's a towel snap, that's a 1/4" around, and definitely a stinger.


I then broke out the whipping cane, and the first strike sent Jackie to a bad place.  The second strike was the end.  I had once again triggered a bad experience in Jackie and we were at the end.  Not much else at that point. I pulled the spreaders off of Jackies ankles and waited till she ok.

No Top ever wants to trigger their bottom.  We've played with the canes several times and never had a problem.  The school paddle had, but not the canes.  So this was a surprise.  I was glad Jackie didn't stay in a bad place long, but it was the end of the  night which was very disappointing for me as I was just about to start on her and finish myself when she triggered.  You'll also notice Day 17 isn't here because my evening got ruined by work and there was no Day 16...so now I'm 2 days without.  So I was very frustrated at the events that happened.

I think this happens to so many couples but instead of working through it they just give up, that's why so many struggle with their sex life.  Jackie and I keep the struggle alive, and during Sexuary we work extra hard on keeping it lively and exciting.  I think though that was the original goal Christina had when she started Sexuary, to show people sex in a relationship is work, and it's important enough to do, even for an entire month.  It's what Jackie and I hope this blog does for others, encourages them to try and do things they wouldn't normally do in their relationships to make them better, to get past the awkwardness and frustrations and to the good parts. Get past the daily grin and make your sex life a priority, even if that means you're having sex 1x a month.  DO IT!!!