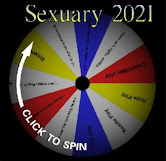 If you've read through our blog you know this is a favorite for Jackie and I.  It's taking things in your house, and/or that you've collected and use them on your blindfolded partner.  The sensation of heat, cold, hard, soft, wet, dry, pain, and pleasure all in one session. In preparation  I put a couple of towels on the bed and pulled out all the supplies I'd use tonight.

So I started the night by really working Jackie up, kissing and rubbing all over her.  One of the best aphrodisiacs out there is touch...and lots of it. After I got Jackie all wound up I put a blindfold on her and put cuffs on her after I moved her to the middle of the bed.

Her favorite cover was tossed over her and I gently pulled it down to her feet.  The softness of this blanket can send chills down your body.  It was the first of the sensations.

Next came fire.  As I lit one of my fire sticks I then gently rolled it over Jackies body over and over again.  I whip it around some areas, running it back and forth. I walked to the other side of the bed when Jackie "ouched...something bit me on the ankle." I looked down and one of the towels had an alcohol burn running by her leg.  I quickly put out the fire on the towel.  Just goes to show you when play with fire, you must at all times be careful and prepared.  I continued with the fire till I was done and Jackie had a warmth all over her skin.

A small flogger made Jackie jump as I gently slashed it against her legs, belly and bottom of her feet.

I took Jackies nipple clamps and started to place them on her. In the past I've put them on and then tighten them down all the way. Today, fully opened Jackie was pulling on her ropes and acting like I ws pulling her nipples off. The only thing we can think of is now she's had her nipples pierced and that's caused a different sensation for her.

I took clothespins and  put them on her labia and left them there.  I put a 3rd on the one nipple that I couldn't get the clamp to stay on.

Next was the violet wand and wartenberg wheel.  The shock of the wand and then the needles of the wheel add to the sensations over her body.

I slowly pulled the clothespins and nipple clamp off of Jackie and watched as she felt the blood rush back to those parts. You could hear her sucking air as each one was removed

A little cornstarch for smoothness over her body came next.

We laid there, me gently rubbing on her after we were finished up. It was a great night and another great Sexuary night.