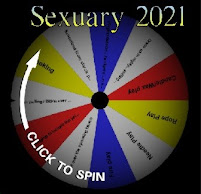 So when I drew today it came up "Needle Play".  Now I knew this was an especially tough day for Jackie.  It was the anniversary of her moms death, and I knew that pain can be very cathartic for her.  I could allow her a relief she wouldn't get any other way.  In the past that often means a good flogging, but as luck of the draw would have it would be needles.

Now I'm by no means a worlds leading artist in any format.  I've played with the needles, and frankly they are a bit tough to make a design that is anything.  Definitely not as easy as it might seem.  But I wanted to do a heart.  It is Sexuary after all, a time for love, and I thought the symbolism of a heart on this day might help her out some.  So I had an idea and prepped.  I got the massage table out, the needles and prep (alcohol wipe, gloves, disposal canister, trash can, and camera) all ready.  When she was ready I blindfolded her. We've found the anticipation when she watches takes away from the ordeal, and leads to some anxiety.  So blindfolded it is. And then I started.

WOW, only 5th needle in and she feels like I've stabbed her 6" south of where my needle was.  I showed her with her hand where I was, and that I was no where near where she thought.  I asked her if I needed to stop, and she assured me she would be ok, so I continued on.

There were times as I continued her emotions welled up inside of her. I would make sure she was ok, ask her color, and continue on.  We were 3 from the end when she wanted to stop. THREE!!! I asked her if she could handle the 3 more and she said yes, but only 3 more.

When I finished I took the pictures..and held my hand on the needles and let her feel the sensations.  This zone is as important as the putting in the needles.  I let her stay there till she told me she was ready to remove the needles.  I quickly removed them and took more pictures.  The raised areas are beautiful.  The heart on her chest was lopsided a bit, but still one of the best designs I've ever done.

Needle play is one of those not very conducive to intercourse afterwards, but it does bring you closer.  The trust Jackie has that I will not hurt her, the love I have as I am putting those needles in, knowing that even as they hurt, they are healing, is all part of the process that those not in the lifestyle will never understand.  I get it, while I have never been vanilla, I have been in vanilla relationships.  There is a difference. This relationship, and the work we do in Sexuary is very important to us!!!

So I've included the pictures of the 50+ needles in her chest, and then of the heart shape left after we were done.  Honestly it looks even better the day after, though there was a yelp from the shower as the warm water hit that area of her chest.

Do a couple of things if you are going to try this: 1) make sure you get sterile needles individually wrapped.  Once the package is opened either use it or dispose of it. 2) always wear gloves, but remember, odds are eventually you are going to get poked yourself too.  3) Sterilize the surface to be poked with alcohol before and after (yes it's going to sting afterwards, but better than an infection), 4) Dispose of your needles properly.  Originally I had a coffee can with a taped lid and skull and crossbones on it, now I have the same as hospitals...but either way these are bio hazards, treat them as such.  5) remember proper aftercare.  This can be just as traumatic as a flogging or more, remember that.

Hope this helps, and for the records those are 27 and 25 gauge needles I used.  Since I was doing so many I went small.