We've always said we've had to be very flexible with Sexuary.  Our calendar is a great start but things happen and we have to be able to go with the flow. So of course we've had 2 major changes that have changed the calendar, and...well we've unofficially started Sexuary.  So totally unplanned, more it was meant to be in prep for Sexuary, we started.

So over the last year Jackie has had a couple of very positive experiences with pot.  A friend offered her some, and with my being ok with it, she imbibed.  Now when I was a teenager I experimented with some pot, but that was 40 years ago, and honestly I don't remember other than the munchie and spacing out anything about it. I sure don't remember the names Indica or Sativa. But during her playing around we found that she got, let's say very sensitive. My touching her skin would send her into a trance and to say she'd be very susceptible to monkey loving sex would be an understatement.  This fall we tried again and were disappointed when we found out that the Indica does not have the same effect the Sativa did, or the mix we found in California edibles.

So Jackie found some Sativa for Sexuary and was 'testing it out' and yeap, that was the stuff she'd tried before that did the trick.  My nails running along her belly, my bites on her breast and thighs, my lips on her clit all sent her nerves over the top.  Her orgasms were plentiful and over the top.  When done she had a couple of hickies, maybe a bite mark or 2 and the bed was soaked from the days adventures. Sexuary has started off with a bang.

Now I don't care you're position on pot. What I'm talking about is the side effects it has for Jackie sexually, and let me tell you they are positive! It's not like a drunk where you just get numb, it's like you've been electrocuted and all your nerves are firing...and oh boy that sure can make sex great.

I don't know the effects on everyone else, but the couple of edibles Jackie has made for this Sexuary should make it an interesting month.

PS, we're still 'officially' days away from Sexuary.  If your sex life isn't 100% perfect, NOW is the time to do something. Make a change! Do something different this month you don't normally do! The the aggressor, be the submissive, go neck in the car, sext with your partner, do SOMETHING different, now is the time to plan and execute that plan.

Jackie here...so as you can see we have been playing around with pot.  Which one would do "the trick"? Which one causes a great buzz but yet makes your nerves on edge with electricity and which one doesn't? Which one makes you sleeping, hungry or or or or...

In our trying things out over the course of a year or so its been hard to nail it down.  Was it Sativa or Indica (I mean 30 years ago the question was is it skunk or not) The person whom I had been smoking with had no clue what she had since it was given to her. When I went to Cali I had to explain that I was a recreational user and that meant maybe 3 times a year in the last year.  They just suggested some edibles (which were awesome) but I didn't know until last week what they were.

So this brings us to last fall.  I  get some "Sticky Garcia" which I later found out was an Indica Blend.  I made it into edibles and while I loved the "chilling" out part, in no way shape or form did it set me on fire.  Almost the opposite, I have now being taking them to sleep better.  I sleep hard as a rock after I eat an Indica ball.

This past week I contacted someone and told them specifically I wanted Sativa and make it good.  I talk the talk but really have no idea about things...lol...So we pick it up, I have now bought a bong, a grinder, and storage to hopefully keep that wonderful smell  from being all over the house. I get home and have a hit or two not sure what to expect. Wondering is this what I was hoping or is this gonna be another let down.  Well let me tell you THIS is the stuff....Sexy Sativa...my flavor right now is Orange Crush...Holy Shit once it hit it was like every nerve in my body was on fire.  The breeze from the fan made me tingle, the clothes on my body were too much.  I can tell you each and every nerve in my body was LIT.

Dane took me to the bedroom and trailed his nails up and down my body it was like  nothing I had experienced.  It was pure hot bliss.  You can't fight your body reactions the only thing you can do is roll with it.  Man did I roll.  Between the nails, the biting, the scratching, the spankings and (I am sure I am missing something) It was like no other time.  There is NOTHING that can compare to it.  It is even hard to put it down on paper the feeling of pure ecstasy, orgasms that roller over and over and over harder than the one before. OMG my eyes roll back in my head just thinking about it...

So just remember if your going to experiment, start slow.  One or two tokes, one edible until you know how you react.  Sexy sativa or indca(in-da-couch) Any questions use this chart to help or ask.  If I don't know I will find out for you!--Jackie 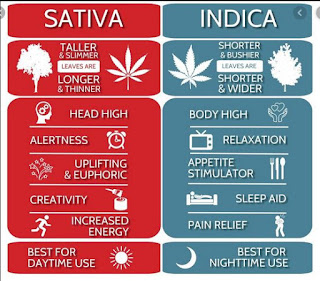