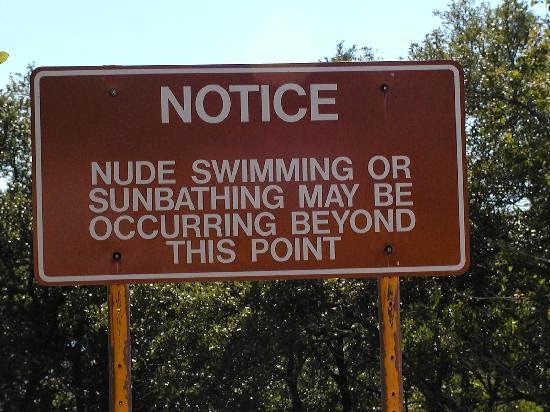 So this weekend Jackie and I were invited to "Another Birthday in the Buff" at Hippie Hollow in Austin.  Now before I go much further you need to know a couple of things.

1) I'm a nudist anyway.  If the kids are gone I'm naked.  I've been that way since high school where I was always the first one with my cloths off and in the lake. If you come over unannounced to my house and there are no kids here, you're liable to find us naked.  I love the feeling of being naked and it doesn't matter if it's inside or outside I'm good with it.
2) Jackie and I have considered going to other nude establishments, particularly River Ranch in San Antonio.  Had the staff been a bit more polite when we called we might of been hanging out there 2 years ago.
3) Jackie is a typical woman who doesn't see all the beauty I see in her nakedness, but has come a LONG ways over the last 8 or 9 years.  She now enjoys being naked when the kids are away from home too.  This is huge from when I first met her. But she still worries about being naked around other people.

But invitations were received and much to my surprise Jackie said she'd seriously think about it.  A friend of hers whom she mentioned the bash too encouraged her, and told her she and her husband use to go all the time to Hippie Hollow, and that we should go.  So with Jackie on board we were set and off we went.  The only down side was we had previously committed to something back home (over an hour and a half away) for 6, so we wouldn't get to stay for the whole party, or for that matter very long.

Mother Nature provided a beautiful day for the bash, and after making our way down the rocky, hilly trail we met up with the birthday girl and some of her friends.  It took me about 2 minutes, only because I was helping set things up, for me to be naked and enjoying myself.  Ahhhh wind blowing through my....ahhh...legs, and arms, and everything else dangling around. I'd say hair, but there's just not enough there to blow through anymore.

Of course we took precautions and sprayed down with suntan lotion.  Hey, some of those parts rarely see sun and there was no reason to be burnt there later.  With a beer in hand we headed down to the water and while it was cool to get in, you quickly warmed up.

Now Jackie wasn't quite as adventurous.  She did get a bit skimpy with her top and bottoms but wasn't ready for the whole naked experience.

And bam, before we knew it, it was time to leave. With sad faces saying hello/goodbye to everyone just showing up we packed up and headed home. Even with all that I got 90 minutes or so of hanging out a-la-natural and was pretty happy.

So Sunday morning I made the comment that I wish we lived closer to the beach, I'd love to dig my feet into the sand.  The swim in the lake just put that in me and I wanted more water time. I figured sometime that day we'd go to the pool and enjoy some water.  Well Jackie, much to my surprise, suggest we head back to Hippie Hollow.  When I finished the chore I was doing I asked her if she was serious, and told her I really wasn't suggesting that but would be ok if we went.  She was and we did.

We took 1/2 the stuff we took the day before.  I'm really not sure how some of the folks get all that gear down the hill.  They should rent pack mules to help people out.  But with only the essentials we found a good spot, and we settled down and the cloths just fell off.  This time Jackie was topless so I made sure she was well lotioned so nothing would burn. We spent about 3 1/2 hours in and out of the water.  During that time we made some observations:

1) There were all kinds there.  I think every age from 18 - 80 were represented.  Additionally there were skinny and plump, tall and short, shaved, trimmed, and all natural men and women.  There were couples and singles.
2) While clothing is optional we saw it all.  Most are nude or close to it.  Almost all the men I'd say were nude.  About 60% the women were nude, give or take a bit.  Those that weren't nude for the most part wore bottoms and went topless.  But even with all that there were those with more on.  There were some that were in bra and panties.  There were some with shirts and bottoms on.  And regardless of what you wore everyone seemed to be treated respectfully.  Nobody was ridiculed for what they did or didn't wear, being fat and naked or in a 2 piece that would be whispered about as you walked on most public beaches.  These were real people just chilling out and having fun.
3) This group was friendly.  On Saturday we only knew 1 person to start with, the birthday girl.  But within minutes were were friends with everyone talking about Sexuary and our fetish list.  On Sunday we had a group just start talking to us and chatting away.  I guess when there's nothing to be pretentious about we're just all equal....naked...and in the water.  So it was a very friendly group.

And while I'd be lying if I said we didn't notice some of the attractions (both male and female) that were there, it really wasn't about sex.  We weren't picking up someone from here.  We weren't checking out some gal/guy to bring home with us.  We admired some beautiful bodies, some great tattoos, and even made note of some tan lines that were obviously missing.

I also made note of some pretty cool floating devices and the different ways people carried all their gear down the hillside for the day.

I think Jackie felt better about herself when it was all said and done, and me? I got to spend a weekend with Jackie and her body which I love to death, and to the fortune of others I'm sure there were a couple of guys/gals who got a good look at her too, lucky devils they were.  And it was a weekend outside naked which I'll take anytime.

PS - Didn't do anything for my birthday this year, and since it's in the early spring (not the best time for this type of activity) we were thinking about a 1/2 year birthday bash for me in September.  It was Jackies idea, so who knows what might happen.


Jackie here, its been crazy around here lately.  We really needed an adult get away, so when the invitation came across, while I wasn't suprised on getting invited I was more suprised at my even thinking about it.  I am more comfortable getting naked around Dane and really like the "exhibitionist" side of me.  To go out and be naked knowingly infront of people when I wasn't sure there was enough liquid encouragement out there.  So here we were invited to a naked birthday party...A NAKED birthday party...My first reaction was er ummmm well this is my kids teacher...do I really want them to see me naked? Do I want to cross that line...I mean come on, when you get naked in front of someone it kinda takes the relationship to a different level...Would I be able to see these people in public knowing they have seen my tits and pussy? I just wasn't ready for that.... So I agreed to think about it...I wasn't sure about it.  I talked to another good friend about it, she really pumped my spirit up about it, heck she is a very conservative person and for her to say she used to go, totally blew my mind, so I agreed.  I was not sure how naked I would get though, I went through my closet and was prepared to just wear my bathing suit bottoms and a bra. Saturday afternoon came, I couldn't find the bra so I settled on my bathing suit. So off we went. I was so nervous...How do I look at person, how do I act, damn I don't wanna gawk at the nakedness around me..I had over an hour to think about it. An hour is a make it or break amount of time.  I had about decided to lose the shirt but once there and all I saw were little bodies with perky little boobs, I wasn't sure anyone would want to see, me a plus size woman with saggy boobs, so I decided to leave the swim suit on.  I did at least pull straps down but that was it.  I was fine with myself and even being there was a HUGE step for me. On saturday we had to leave early for another get together so we headed out after about 2 hours.

Sunday rolled around and Dane made the comment that he wished we lived closer to the lake.  I agreed then suggested going back to Hippy Hollow. I think he was pretty surprised when I made the suggestion.  He knew we had a good time but he was surprised that I said lets go again! So this time we loaded up lightly, and I decided if I was going to do it this would be the day, so to prepare myself I didn't even wear a swimsuit, I just wore a tshirt, no bra, and my swimsuit bottoms.  WE got there and I bit the bullet, I took my shirt off and had Dane spray me down, wouldn't want burn.
We spent most of the afternoon there, drinking a few, enjoying each others company, getting used to being around naked bodies.  I still have to go to there a few more times before I am totally comfortable, but I can't wait to go again.  It was a lot of fun, and can't wait for more memories..
Jackie
Posted by Jackie and Dane at 7:47 PM