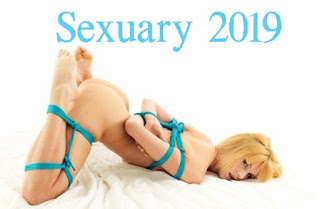 Ok, so this one isn’t hot and sexy, but it is part of life and specifically speaks directly to our sex life.  Jackie has suffered from depression for years.  And over the years they’ve had to change her medication because the insurance would change their plan and they wouldn’t cover this or that.  Well in January we went into see the doctor for her refill checkup she told her doctor she always loved this one med, and while the ones she was on were ok, she didn’t love them. They seemed to narrow her emotions too much. Come to find out she could change back to the medication she preferred.

Now Sexuary has rolled around, and for the first time in years Jackie is REALLY in the game.  She’s 100% with it and enjoying herself again.  She finding new things that turn her on and new ways to turn me on.  She’s with it.

In one of the groups I belong to I’ve read where a couple of the women talk about their depression and their lack of sexual desires.  These medications are made to keep your emotions in a smaller range than normal, and in doing so can, and often do, take away your sexual desires.

Hormonal imbalances can do the same thing.  About 10 years ago, we found out that Jackie’s hormones were all wacked out.   When we went to the doctor he started quoting us conversations we’d had in bed about her lack of desire almost verbatim.  Jackie almost swore I’d called the doctor and told him it was that dead on.  He pulled out his chart and said, “nope, that’s what happens when your hormones get out of wack.”  A little cream, a couple of estrogen pills, and Jackie went from no desires to raping Dane when he walked in the door.

So where am I going with all this? A couple of things, 1) if you’re on medication and you have no sex drive, talk to your doctor.  There is a chance they can change your medications and help you get that part of your life back.  2) Even if you’re not on medications, you might talk to your doctor.  They might be able to run some blood work and find out there is an imbalance that is causing some of the issues.  Believe it or not, that urge to kill your partner could be as much a medical issue as it is they are being a dumb ass. Even I have gone through bouts where high blood pressure or diabetes threw me off and when I look back realized how much it changed my personality.  Now that all that’s gone, I’m a much happier person, which makes it much easy for Jackie to want to have fun with me.

I truly believe that the lack of what I would call successful Sexuarys over the last couple of years have been at least in part because of medication.  I REALLY believe that the visit in January and the changes we made have given Jackie a lot of her life back, and before that we didn’t even realize just how much it was effecting her.  I because of that Sexuary 2019 has been a banner year for us so far, and we still have almost half a month left.

So if you find there is no desire, no drive, maybe make that appointment and get a checkup, or talk to your doctor about the medications you are taking and ask if there is some changes you can make that might make a real difference in your world.