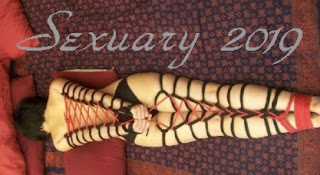 So after we were playing with Thomas and Kitty one night Jackie said to me, “Thomas bit me on my thighs” and my first reaction was to get a little upset until she continued, “and I didn’t not like it.”

With a little puzzled look on my face I asked her, “you didn’t NOT like it?”

“Nope, didn’t not like it, creamed all over his face as he did it.”

Later when I spoke to Thomas about it, he said he bit the first time and after that, she literally grabbed his head and shoved it to her thighs for him to continue the biting.

Now we’ve played with autovampirism over the years.  It made the 2013 original calendar. And Jackie is definitely into anything vampire, but normally over the years for us, it’s been more sucking (OK, Dane is the worst hickie giver ever) or except for the back of her neck just never seemed to be a turn on.  So again the “we tried it, it was ok but…tried it again and now it rocks” is the case.

So after the discussion the next morning we’re laying there and Jackie, who now has bruises on both thighs and a long line across her back from all the bites, tells me “stop breathing on my neck”…with a puzzled look I move a bit, but as I do I give her a little bite.  Jackie starts to cream and turns into an instant pot and is ready to boil.  After a few more bites, the sex was fantastic! I can say I really felt a bit sorry for the hotel bed and sofa.  I’d bet good money it’s never been cum on like it was that weekend ever before.

The back of Jackie’s’ neck, her breast, her ass, her thighs have all become a major playground for biting this month.  We’d know many women who have constant bruising, most of them from flogging, but we’d always wondered about the constant bruising.  Wednesday Jackie was proud of her bruises and was ready to show them off.  She gets it now.  She understand why someone would want to have bruising.  It represents the fun that happened and the pleasure/pain aspect of sex.

So would I go and just take a huge bite out of your partner? Of course not…but I would take a nibble and see where that goes.  If you’re not rejected, try a different spot, or try a bit harder. Find the combination that works for you.  What we’ve found is that for us, Jackie has several great zones that work and work well.  I learned a new way to get her in the mood, and she’s learned that bruises can be fun.