So electricity is nothing new to Jackie and I. It is not a front shelf item, but it is something we breakout from time to time.  When I think of paincentric electricity definitely fits into that category.  There is a working through the pain that brings you to a pleasure that won't be reached otherwise.

This time though our rules changed a bit. In the past the person receiving the electricity has always been in control of the device.  You control the power, and most of the time you even dictated where and how long it would go on an area.  In our paincentric experiment I took that away from Jackie.

The beauty of electricity is it doesn't just stay where you put it, but it travels through the body.  The initial spark will tantalize the area, it can hurt so good!

We happen to have a professional TENS unit, but we also have a Violet Wand (knockoff) and a new Therapy Pen.

Wish link
This little device is powered by 1 AA battery, and kicks a nice punch. For about $6 from wish you can have one too. When you have your hand on your partner and touch them with the pen you'll feel the electricity, no matter how far away your hand is. While I don't feel anything until about level 5, Jackie felt it at 1, so sensitivity is an individual thing. We never got to 9 last night.

Additionally, years ago we purchased an electric wand.  It's not a true Violet Wand (brand name) but does a great job. These start about $40 on Amazon.  They are WONDERFUL! Different attachments do different things. The experience you can create with this little device would definitely add to any spanking bench or St Andrews Cross. 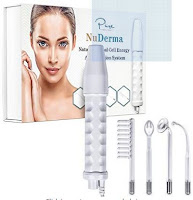 
Afterwards Jackie mentioned she'd like to pull this one further to the front of the list than it has been in the past. So I think it went over well.

On a side note, I also broke out a spreader bar for the first time.  It wasn't necessary for the play we were doing, but it was a great time to introduce something new.  They went over well actually. Better than I thought. I have other plans for it over the month, and now know she won't freak out over having them put on.

Where are you at on your Sexuary? Any plans? It officially starts in 2 days, so you still have time to plan something, ANYTHING different for next month.  Be it 1x or 29 times, do something out of your box!

Playing with Sparks...so I do not know what we are doing each day, Only Dane does.  This being said I knew that this would be a great night of play.  I started the evening with a margarita, a hot bath and an edible that I had made....Hot baths always mean a good clean shaved pussy afterwards...So after I ate the edible I got way over heated and quickly got out of the bath and got to my chair to cool off.  I had a pretty good buzz going as I sat there.  After about 30-45 mins I told Dane I was good to go.

I thought I still had my buzz going but it wasn't long after getting into the leg spreader that he began tonight's session. I had been blindfolded so I couldn't see anything.  I heard a click click click as something came on. My mind going thru the roller deck of sounds...nope not this toy....nope not this one...well I never would have guessed it since it was a new one. He stroked it up and down...It was an electric pen type thing..I could tell it was a small head and not the violet wand.  While it wasn't painful, it did not get me to the edge like we had hoped.  He switched to the violent wand again it was great but never really got me to the edge.  Even his normal touching never got me to the edge. It was then that we both realized I was no longer high.  We did stop and lay together and talk about all that had happened this night, going thru the "thorns and roses" of the evening.  We did go later and finish up, after all this is Sexuary and its about both of us enjoying ourself.

While we haven't always played while I was high, we specifically know that it helps me with the Anixety of the unknown.  That while I don't want to be so high that I can't function, I do like the euphoria that makes my nerves on fire.  I love it really to be honest.  So this night was a bit of a let down due to that, but only due to that.  We discussed that I don't want this electricity s to go into the "back of the closet"  I would like to revisit it, both high and not...Jackie