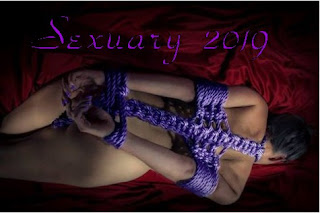 So to end Sexuary we had a birthday party for me at the Austin Dungeon. It's the beauty of having a birthday at the end of Sexuary. So in November Jackie and I decided that this years birthday party would be at the Dungeon.  You can't imagine how excited I was when the decision was made and the deposit was made for the day.

Then comes the next fun decision....who the hell can you invite?  It's not like you can just put out on Facebook that there is a birthday party where we are going to get wild and kinky.  But we have met friends that we knew were in the lifestyle and might just not consider us totally freaky and block us forever.  So the list of 13 people were invited.  Some were unable to come right from the beginning and some backed out for 1 reason or another up until the day of party.  We still wound up with 6 of us there. 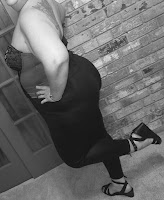 We got to the Dungeon a bit early to set up and get ready.  We didn't have a whole lot of set up, bringing in towels and a bit of food.  More would show up but we just wanted to get started, and let's face it this was a party I didn't want to be late to this party! 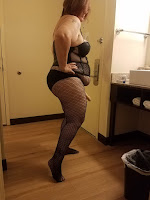 The rest of the couples showed up and since not everyone knew everyone we went over a couple of rules. One of the things we've really adapted is the consent rules of if someone says "No" 1x that's the last time you can ask for the day.  A "Maybe" means you can ask 1 more time, but 2 "Maybes" means a no for the day...see rule 1.  After that the fun started.

Now we'd never played with Gomez and Morticia, but we had some 'moments' with them and spent some time with them.  Jackies first french kiss with a woman was with Morticia around a campfire.  So we were hopeful things would work out. Gomez was a bit shy at first, but after a little liquid encouragement even he jumped right in. 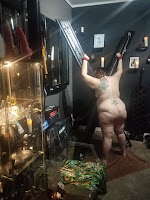 We started with me on the spanking bench, bent over while Jackie used the new vibrating cock in my ass.  Others came around and my hands found pussy's and cocks to play with while my ass got pounded.  Thomas and Kitty worked their magic with my ass and mouth and eventually after a while and plenty of satisfaction we took a break.

After a short break I put Jackie up on the cross where we flogged her.  Several of us took turns and I got to show Morticia just how hot Jackie gets while being flogged.  We drenched the floor with her cum.  I'm not sure why no one believes us, but Jackie seriously squirts when she's orgasmic.  After that we started with other groups forming and group hugs, feeling each other up, licking, sucking, and fucking for the next several hours.   We had the Dungeon for 4 hours and we used every minute of it.  When we left I don't think there was 1 genital that wasn't satisfied. A couple of them were a little raw, and the next day there were some abs that were sore from all the fucking and orgasms.

I think my tongue was the happiest it's ever been.  That night there were several first for different people.  It was a total no judgement zone where everyone was there to have a good time and celebrate my birthday.  I can't imagine a better birthday party every.   Great friends, great sex, and just a totally wonderful day.

I know there are Dungeons for rent in many large cities. Go for it! Figure out that handful of friends you can invite and rent a Dungeon for your next birthday party! Honestly I'm thinking of doing it 2 - 4 times a year I had so much fun!